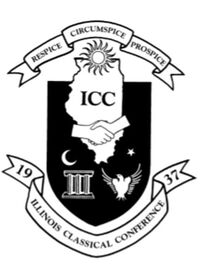 AUGUST 28, 2020 4:00-5:15
SINCLAIR BELL, FULL PROFESSOR OF ART HISTORY, SCHOOL OF ART AND DESIGN, NORTHERN ILLINOIS UNIVERSITY
“CONTEXTUALIZING ETHNICITY, SLAVERY, AND CLASSICS: STRATEGIES FOR USING THE VISUAL AND MATERIAL CULTURE OF THE ROMAN EMPIRE IN THE CLASSROOM”

KRISHNI BURNS, LECTURER OF LATIN, UNIVERSITY OF ILLINOIS AT CHICAGO, DEPT. OF CLASSICS & MEDITERRANEAN STUDIES
“SOME APPROACHES TO ANCIENT SLAVERY IN THE CLASSROOM”
​resources here

CONGRATULATIONS TO THE 2020 ILLINOIS delegation to Njcl!

In response to the killing of George Floyd and others, and the systemic inequalities faced by Black people and people of color in America, the ICC endorses the following CANE statement.

The ICC, too, “unequivocally condemns police brutality and believes Black lives matter. The field of classics must end white silence about societal injustice.”

The ICC encourages members to make use of “Black-Centered Resources for Ancient Mediterranean Studies” compiled by  Zoé Elise Thomas.

In addition to this public statement, the ICC would like to call for volunteers to work on a specific action plan to increase diversity and inclusion within the organization. If you are interested, please contact Prof. Ariana Traill at traill@illinois.edu
Click for open Latin positions

​
We are deeply saddened to announce the death of beloved friend, colleague, teacher, and author LeaAnn Osburn.

LeaAnn A. Osburn, 67, of Phoenix, AZ and formerly of Elmhurst. Beloved life partner of Mark Ducar; mother of Eric L. and Scott L.; grandmother of Gary Alexanderr and Daniel. LeaAnn was a Latin teacher for 40 years in the Barrington School District #220. She was a member of ICC, ACL, CAMWS and ICTFL. LeaAnn received numerous awards from the State of Illinois as well as from the above mentioned organizations, additionally, LeaAnn was a beloved Chicago Cubs fan. Services and Interment were Private.

Requiescat in pace.
Powered by